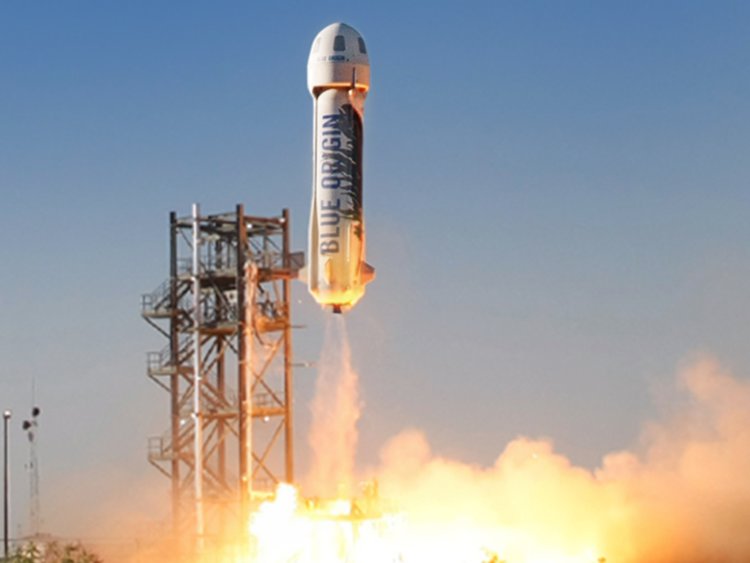 Blue Origin is a company that similar to SpaceX and based out of Washington state. It is primarily funded by founder Jeff Bezos, better known as the CEO of Amazon. They launched their New Shepard rocket from West Texas at 9:32 AM ET.

There are two main values of Blue Origin you need to know to understand how important this launch is: reusability of rockets and commercialized space travel.

Reusability is a buzz word in modern day aerospace as we work to make space as efficient as possible. On this launch, Blue Origin successful landed its booster. The first time we saw a successful booster recovery was in November 2015 by Blue Origin. The next was SpaceX, close on their heels in Decemeber 2015. However, SpaceX had the first orbital (exited Earth's atmosphere) recovery and far more complex. Even though this technology has been in the media for years, the booster landing never ceases to get crowd applause during launch.

Now here is the record-breaking stat of the launch. This was Blue Origin’s fifth time using the New Shepard rocket! And that is currently the number to beat in reusability.

On the space travel aspect, this launch was the 11th test for a commercialized space trip for civilians. Blue Origin plans to take six lucky (and most likely rich) people to the brink of space where they will then be able to experience zero gravity for three minutes before the capsule returns to Earth.

The capsule on this trip is made up of huge windows so passengers can get the full effect of space. The capsule will travel to about 62 miles above the earth’s surface to the very fine line where our atmosphere meets the emptiness of space. From there, it will begin its return to be parachuted back to Earth. The entire trip itself will take right around eleven minutes to complete and will follow a parabolic or arch-like path. 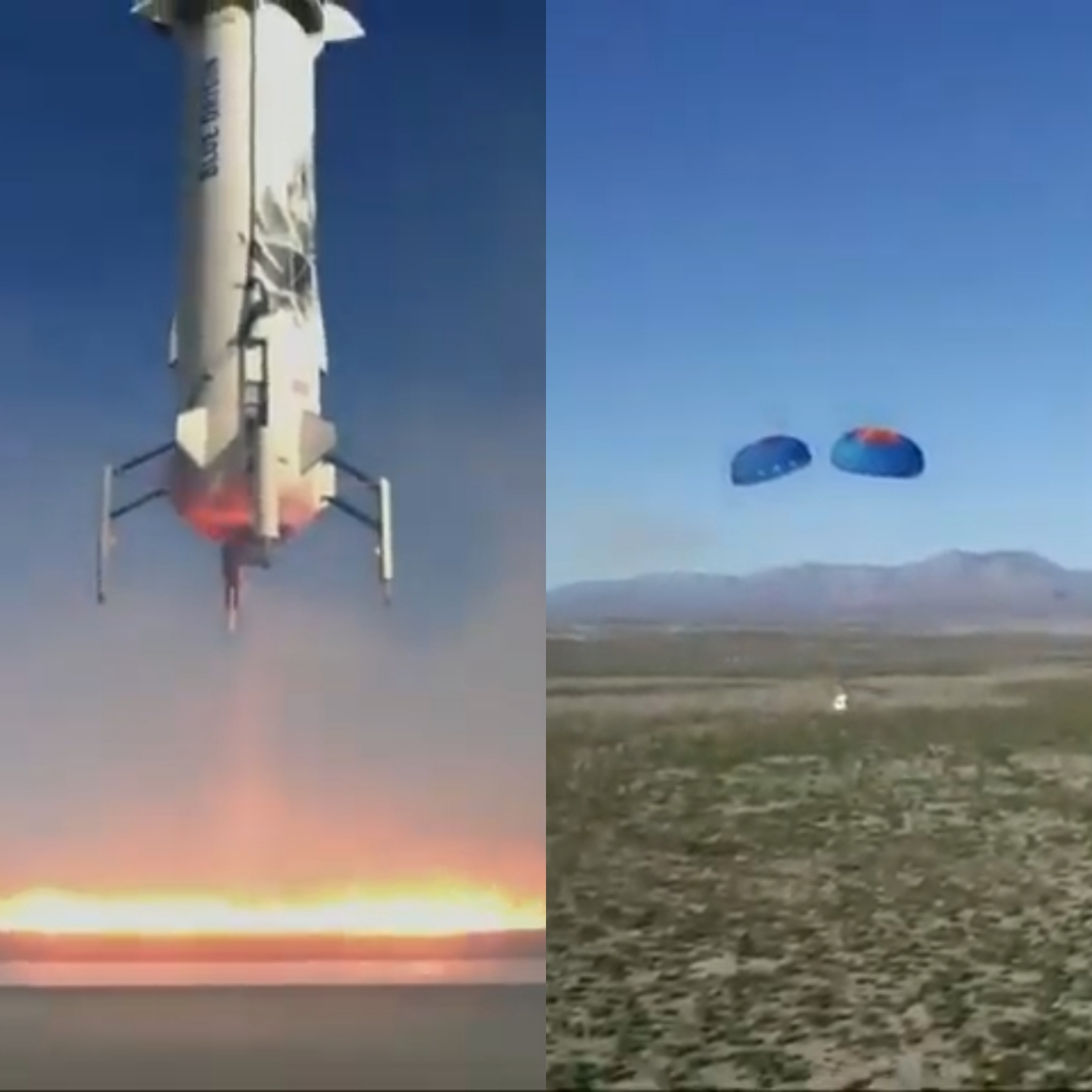 As mentioned, the rocket that had its shining moment in Texas is called New Shepard. It is a tribute to the first American in space, Alan Shepard. Shepard performed a similar flight trajectory in 1961 where he scraped the edge of space in Freedom 7 on the Mercury-Redstone 3 mission. The naming of this capsule was done in honor of all the great things that came from Shepard’s first flight to space.

This launch was a successful test in Blue Origin’s goal to get civilians in space on reusable rockets. This is their tenth successful landing of the capsule and, while it wasn’t carrying humans, it was carrying 38 science experiments that we will be able to gather information from. Despite their growing success, the space company has yet to name a date for their human launch or even a price tag for tickets. Nonetheless, Blue Origin is making huge strides in the space industry. They are proving that not only can they keep up with the competition of modern-day technology, they can also be a leader in it. 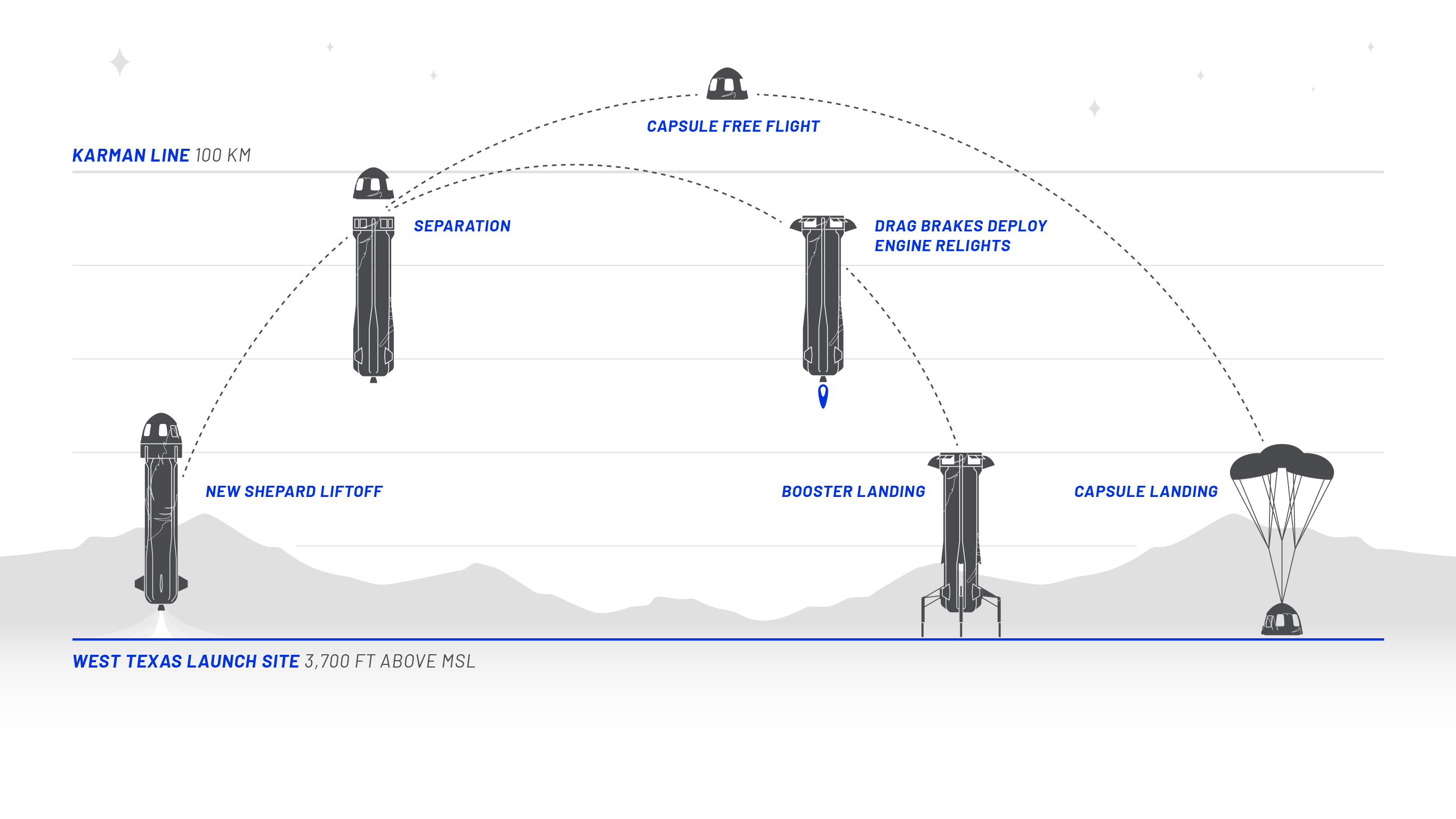 China is going to the Moon

China has officially announced their plans to build on the moon! Not just to have humans on the lunar surface, but actual buildings. Their plan is to have a research station on the moon within 10 years. This 2029 goal was announced by the China National Space Administration (CNSA) and they have their sites set to build on the south pole. When NASA first took humans to the moon, the target zone was along the equator. Now, even NASA is looking at the south pole for their 2024 human landing date. So why is everyone suddenly so interested in the south pole?

The easy answer is because we haven’t been there yet, only along the equator during the missions from 1969 to 1972. But on top of that, both lunar poles have ice. This was proven with one of China’s missions, Ching’e-1, in 2007. There is also most likely an abundance of He-3 (Helium-3) just below a layer brushed over by solar winds years and years before life on Earth existed. Both He-3 and H2O offer great sources of fuel for our rockets. This would mean rockets would only have to launch with enough fuel to get to the moon, and not the extra weight of doubling it to get home. The other aspect with mining the water of the moon would be supporting human life. The H2 part of water is the fuel so this means the O can be used as breathable oxygen for astronauts. Plus having water supply is good anytime you want to support life. 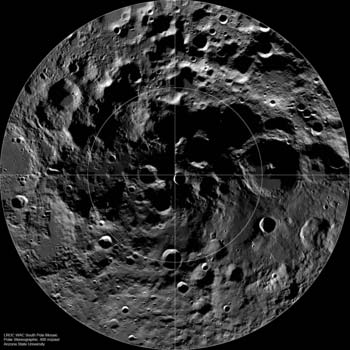 The South Pole of the moon. Credit: NASA

While CNSA has not yet released what their research facility will be researching, they have shown us that they are incredibly serious about this goal. Earlier this year, Ching’e-4 officially landed, unmanned, on the far side of the moon. This was a historical moment as the number one difficulty with the dark side of the moon is the lack of communication. Many countries have crashed their own probes into the craters of the moon trying to do what China did on January 5th. CNSA did this by having an extra satellite on the far side that could relay the connection back to Earth.

On top of this robotic success, CNSA has astronauts on their two temporary space stations (Tiangong 1 and 2) and has announced plans of a larger orbiting space station. Their space station, not affiliated with the ISS, will have the first half in orbit in 2020 by means of their new yet successful Long March 5B rocket. Another important step in their process is the recon work being done by probes. Chang’e-5 is scheduled to return later this year with lunar samples to give CNSA a better understanding of what they will be up against. They also announced at least three more lunar launches before they send humans up.

China has made it very clear to the world that they are on board this space adventure. They have given us where and when they want to build their research station as well as outlined their missions that will get them there. History tends to repeat itself and, in the USA, the space exploration is being compared to the expansion West. In the eastern world, the comparison is to China’s next Silk Road, full of prestige and prosperity for the nation. Here is to the next great adventure that China will most certainly be on. 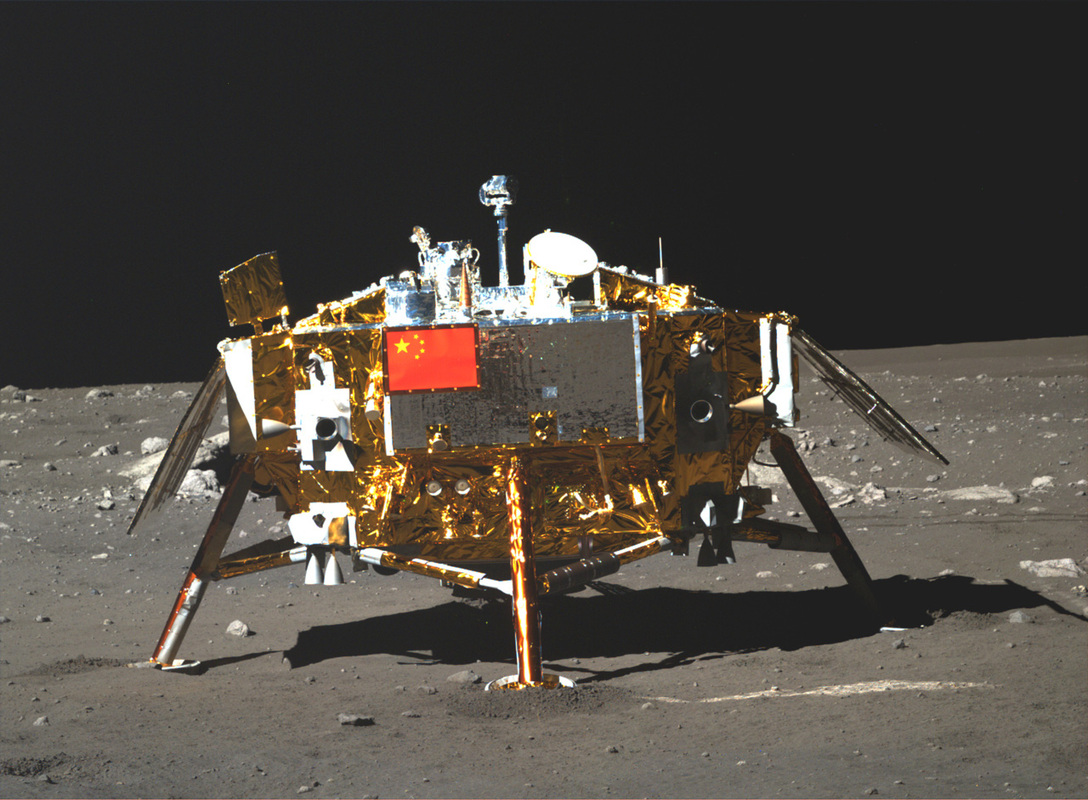 The Hubble Science Telescope (HST) is celebrating 29 years since its launch date of April 24, 1990. Not only is it a really cool piece of space hardware floating up there in space, it has significantly increased our understanding of the cosmos as we look past our solar system.

Named after Edwin Hubble, this telescope has orbited the earth 137,000 times (that means it has travelled over 4 billion miles) and has sent us high-accuracy photos of deep space that never stop leaving us speechless. The unique thing about Hubble is its location. It is orbiting the planet at Low Earth Orbit which means pictures aren’t obstructed by weather, atmospheric distortion, or light pollution. It is just 100% pure space.

The main question people always ask: okay, but how does it work? Simple, it only took years of engineering from the top minds at NASA. The Hubble telescope actually works like most telescopes, making it a Cassegrain reflector scope. It has a long tube (only this one is 43.5 ft long) and mirrors that reflect light back to the observer. The light from the galaxy we are trying to see makes sort of “W” as it bounces around inside off the mirrors. The telescope then uses all sorts of different kinds of cameras and light sensors to gather information. The information is then stitched together to make the classic galaxy photos we see today. 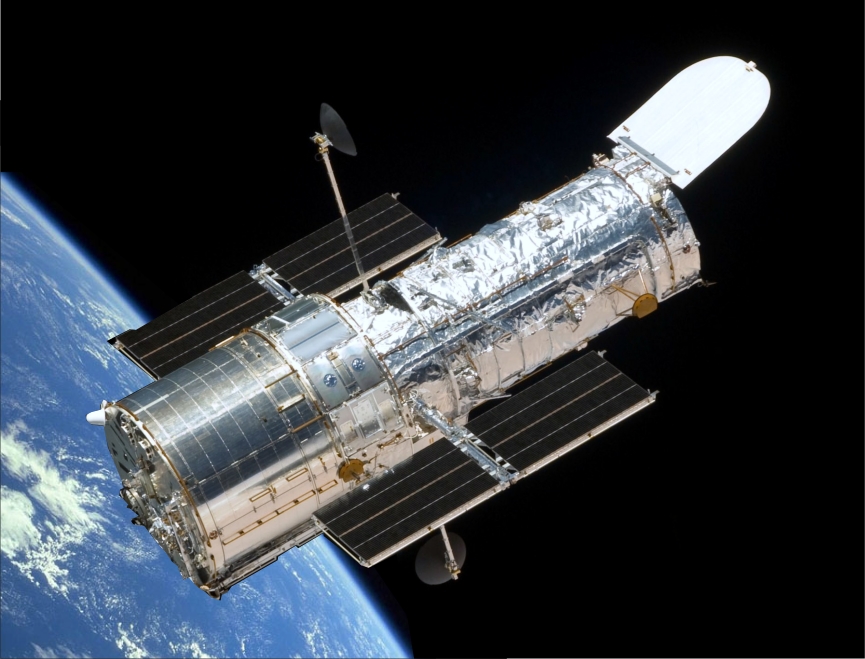 The mirrors are where a lot of the engineering comes into play. The primary mirror is over 7 ft in diameter and has been polished to near perfection. The key word there is “near”. When Hubble first launched, the photos were coming back fuzzy. NASA had to quickly work to fix their $1.5 billion telescope. The solution was a series of smaller mirrors called COSTAR that were used to smooth out the imperfections of the primary mirror. That way the second mirror reflects a clearer image back to the cameras and sensors. Over time, NASA figured out how to calibrate the equipment to account for the defects and the support mirrors are no longer needed. It is important to note that this defect incredibly small, actually about 1/50th the size of a human hair. But when we are talking about an insane accuracy that reflects back images from12 billion light years away, even that small of a defect can make a difference.

The Hubble telescope has taken close to 1.3 million photos in its time around the earth. Some of the popular images include Butterfly Nebula, the Helix Nebula, the Mice Galaxy, and, most famously, the Hubble Ultra Deep Field image of thousands of galaxies light years away. Here is a handful of my favorites but a larger collection can be found at NASA. 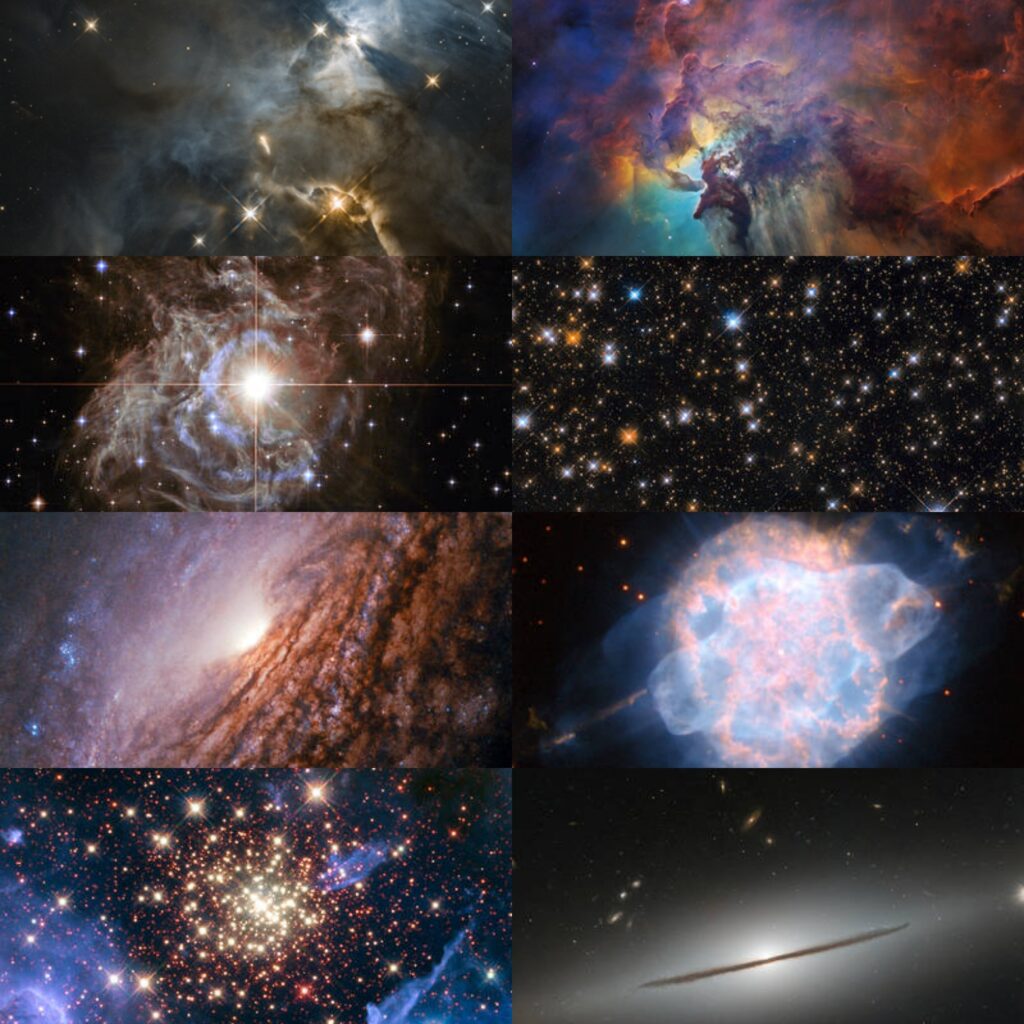 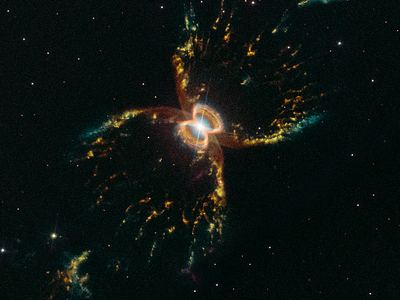 So Happy Birthday Hubble! We have already gotten 29 wonderful years of information and imagination from the little telescope. For its birthday, Hubble released another amazing deep space picture called the Southern Crab Nebula. I can’t wait to see what else we will discover thanks to the technology of this amazing telescope.